To Meet: The Bowery Boys

Tom Meyers and Greg Young know a lot about New York City history; thankfully they aren’t ones to keep a good thing to themselves. Their podcast, The Bowery Boys, features fresh perspectives on historical landmarks and lesser-known gems about New York City’s illustrious past. They leave no public library, micro-film, or special collection unturned, in the hopes of finding the perfect morsel that may lead to their next podcast.

We caught up with them in Manhattan’s Jackson Square Park to chat about the benefits of getting lost and their recommendations for making the most of the city.

One of your missions states, “We’re all paying a ridiculous amount of cash to live in this city, so why not get your money’s worth by knowing more about it?” How has this podcast affected how you look at and live in New York City?

Tom: I find myself stopping more as I’m walking around town and looking at things… especially when there are construction sites now, I stop. I love the construction sites. When they rip open the streets I always pull over to see what’s going on down there. It’s amazing the things you see in this city, and it’s even more amazing the things you don’t see in the city. Any time that this thin veneer is removed it’s a chance to witness the small miracles that make it all possible.

Greg: I don’t think anyone looks at the Woolworth building with as much admiration as I do. I’ve walked in front of that building for 15 years, but then knowing the backstory of why it is how it is., knowing who Woolworth was, why people like Woolworth were building around City Hall, knowing what that neighborhood was like when it was built—all  that adds such beauty. It lights up at night and I feel like it really is a time traveller from 100 years ago.

The Bowery Boys has featured some colorful characters, including many past mayors, Robert Moses, and on one occasion, a talking dog. Which of these historic New Yorkers would you choose to lead you on a citywide tour of their New York and why?

Tom: George Gershwin. I would have loved to been able to touch Tin Pan Alley. He represents a moment of 1920’s New York that’s mythologized by Cole Porter, by everybody else, but that was very real. To see the glamorous Riverside Drive of the 1920‘s, to hear him play Rhapsody in Blue, to feel like an American in Paris in New York! It would have been amazing to have been at one of these parties during the prohibition in New York… as long as they have a full stocked bar.

Greg: Big Tim Sullivan. He was the powerful ward leader of the Bowery. He owned saloons, but he also had political power and he openly flaunted a corruption that connected both worlds, right up to his strange and untimely death in 1913 when he went insane, was put into an asylum, escaped, and got hit by a train! I would catch him around 1890 during the waning years of New York corruption, so I would want to see his New York because it would be both sides. It would be Delmonico’s restaurant for nice dinners and cigar puffing, and then there would be fistfights on the Bowery. 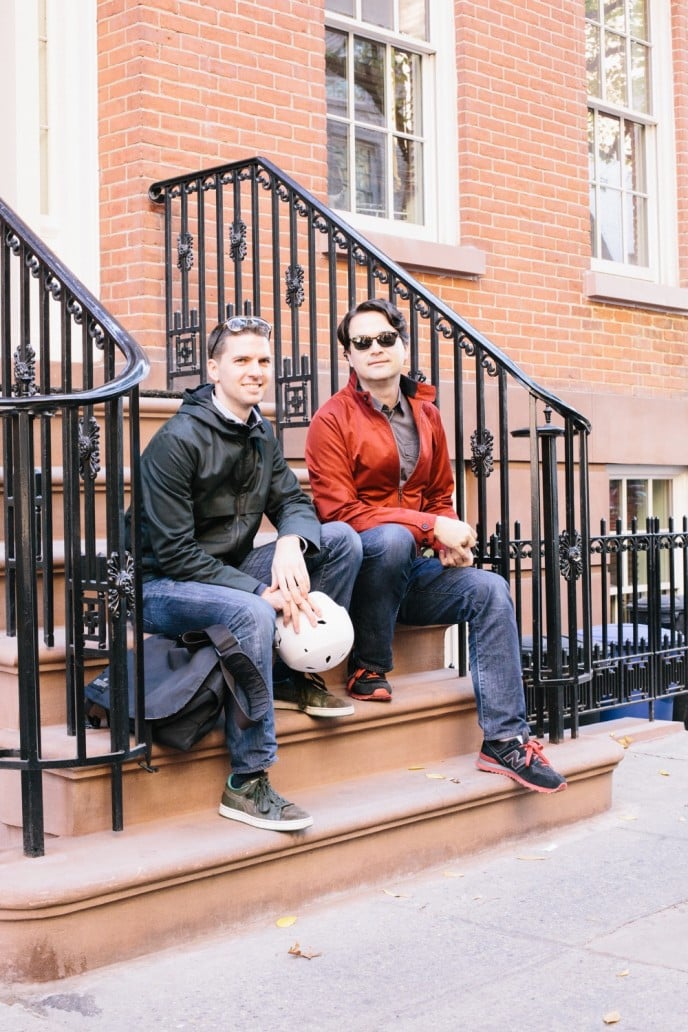 You both know the city so well, but even the most confident veteran has their day. Just curious, when’s the last time you got lost?

Greg: Sometimes I get lost on purpose! I did just that over a month ago, I wanted to walk around a neighborhood, so I went over to Bed Stuy in Brooklyn. I know the main avenues, but there are all these really cool buildings around!  So I said, “I’m not going to look at my phone, just wander around and see where you end up.”

The love you both have for New York City permeates every single episode, but neither of you are native New Yorkers. When did you know this was where you wanted to be?

It goes without saying that you’ve both run into your fair share of film and TV sets, right?

Tom: The day that I moved into my apartment in 1997 the movie Pi was shooting outside my door. I borrowed one of their hand trucks to go pick up my bed!

Greg: I feel like I live in little Hollywood in Cobble Hill! There are something like eight television shows that film there.

After 157 episodes you probably know quite a bit about New York City, so tell us, what’s the ideal place to…

Greg: Neir’s Tavern in Woodhaven, Queens. It dates back to at least the 1850’s (and possibly older) and still has the feel of a cozy old neighborhood bar.  The new owners have given the cocktail menu some fabulous new theme drinks, but they still specialize in old-style cocktails like the Horse’s Neck.

Tom: To take in the sheer magnitude of the city, I love hopping on a bike and following the contours of Manhattan. From the Lower East Side, I can cycle in protected bike lanes along the East River, under the Williamsburg, then Manhattan, then Brooklyn Bridges, through Battery Park and up the West Side on the Hudson River Greenway all the way to the George Washington Bridge. It’s a magnificent ride.

Travel back in time?

Greg: Get lost in the West Village, skip the trendy shops and just admire the quirky, twisting streets, a vestige of the early days of New York.  Wander the era of Victorian Flatbush, an entirely residential area of beautiful homes that are almost entirely preserved from the 1910s-20s. (They filmed Sophie’s Choice in this area.) And for a feel of nineteenth-century luxury, go up to Wave Hill in the Bronx, a preserved home and estate from the 1840s. It later became a summer home for a young Theodore Roosevelt and a very old Mark Twain.

Greg: Leave Times Square and Ellis Island to the out-of-town tourists. For New Yorkers, take the tram and go visit Roosevelt Island. Listen to our podcast on the subject or read up a bit about its history. Then wander around. The island is mostly a residential destination, but it actually has an extraordinary amount of history all around you, from one of New York’s oldest homes to that lighthouse with connections to the old days of Blackwell’s Island.  Even the FDR Four Freedoms Memorial – decades in the making – had a fascinating story to tell, and breathtaking views. Plus the Tram!

Greg: Definitely try Washington Square Park after dark. (Editor’s note: listen to the audio history tour first.) It’s built over an old burial ground. And if you don’t see ghosts, you’re sure to stumble onto something bizarre and interesting here at night.

Back to Main
Next Article
Daily Treasure