The latest on Pupils Project

We’re definitely enjoying summer but after another great school year with Pupils Project, we’re looking forward to the next one. Pupils Project has come a long way but first, to bring you up to speed:

A few years ago, as part of our Buy a Pair, Give a Pair program, we created Pupils Project, our program with a number of organizations and local government agencies in New York City and Baltimore that provides free vision screenings, eye exams, and glasses to kids who need them the most. The American Optometric Association estimates that 80% of childhood learning occurs visually so it’s crucial to address vision problems as early as possible.

Pupils Project works to eliminate any financial and logistical hurdles that get in the way of obtaining vision care. Our partners administer vision screenings and eye exams in the children’s classrooms (where vision issues are often first spotted by teachers) and we provide the glasses, which each student handpicks in trunk show setup at school. For many kids, this is their first pair of glasses.

In 2015, we began a four-year partnership with the City of New York, Department of Education, and the Office of School Health in which we provide school-based vision help to students enrolled in Community Schools. So far, over 46,000 pairs of glasses have been given to students in need. It’s a start but we estimate that of the 1.1 million students enrolled in New York City schools, over 200,000 of them lack the glasses they need to learn. 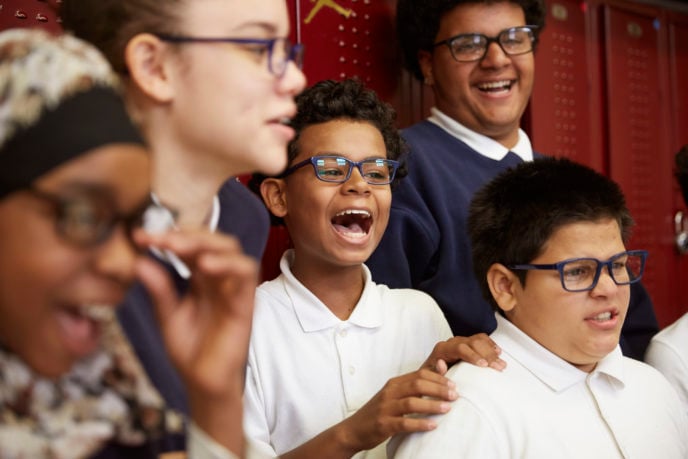 In 2016, we kicked off Vision for Baltimore, a three-year partnership with the City of Baltimore, Baltimore City Health Department, and Vision to Learn, that reaches all students in 150 elementary and middle public schools throughout the city. (This part is especially cool: Johns Hopkins University is conducting a longitudinal study to better understand the correlation between the intervention of vision treatment and reading scores and the benefits of ensuring access to glasses for children in urban settings. Johns Hopkins will publish their findings with the hopes of influencing public policy at a federal level, and to ensure that glasses are within reach of any child who needs them.)